Science, Strategy and War: The Strategic Theory of John Boyd by Frans Osinga

If you are a regular reader of my blog, you probably remember that I started to study Boyd’s thoughts a couple of months ago. It all started with a book recommendation from Ryan Holiday about Boyd: The Fighter Pilot Who Changed the Art of War.

Since then I posted about the OODA loop, the main concepts behind the blitzkrieg, and now I continue this series with a book review.

While Boyd: The Fighter Pilot Who Changed the Art of War is a biography, a book that you can read simply to enjoy yourself, this one is different. Read this book, if you found Boyd’s ideas interesting; if you are interested in history and war.

Science, Strategy and War was started at the School of Advanced Airpower Studies and not surprisingly it discusses mostly the military aspects of Boyd’s thoughts through his presentations, his discourse.

First, his ideas are important. He’s one of the most important strategists of the 20th century. The OODA loop not only gave help for fighters, but it also impacted Scrum as Jeff Sutherland explained. His ideas also changed how fighters are designed, how the Desert Storm was fought.

Second, his ideas are influential. Beyond the previously mentioned areas, Boyd’s ideas defined Marine doctrines, had effects on the US Army, on the UK military, even if his name was often left out as he was not the most agreeable person.

Third, they are not properly and widely understood. Many people – out of those who know him – identifies him with a simplistic version of the OODA loop. 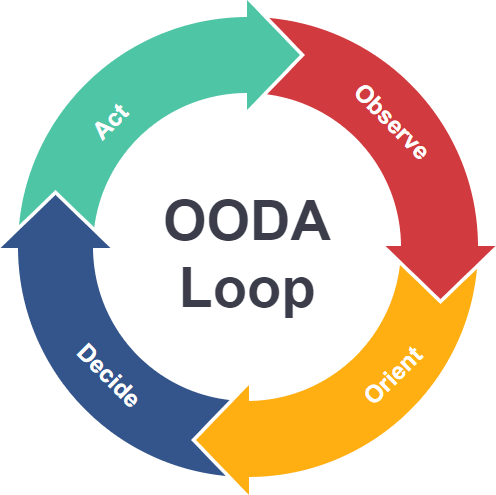 Not even this more elaborate one.

But as we already saw, his ideas go deeper than the OODA loop. He dealt a lot with the general theories behind conflicts, but even about how humans think and come up with new creative thoughts.

Fourth, there are not so many publications dealing with ideas yet. It’s not a big surprise. Boyd didn’t publish anything apart from Destruction and Creation. As his presentations were delivered within the different military institutions, there are not many high-quality recordings available. Unlike other strategists, he didn’t leave behind coherent manuscripts, books. Studying Boyd is not easy, but can be rewarding.

A “novelty” Boyd brought to the Pentagon was military history. It was Boyd who introduced Sun Tzu the author of The Art of War to many generals in the Pentagon.

Many officers knew more about how a business works, about project management than military strategy and the works of the greatest strategists.

It’s both surprising and frightening at the same time. When Boyd started to study why the Blitzkrieg was so successful – until a certain point – he started with examing the work of the strategists who defined the doctrines of the Blitzkrieg and then he moved further and further back in time. He understood that strategies are not standing on their own, but they are the results of earlier ideas combined with experience.

They are, in fact, counterstrategies. So he studied Clausewitz, Napoleon, and continued with ever earlier thinkers until he ended up with Sun Tzu.

He studied an enormous number of books. While he was in Vietnam he either worked or studied. He incorporated all that he learnt into his briefings. His lists of references were huge.

This has an important message also for us, software engineers. Though our history is much shorter – still longer than many would think -, it’s important to know it.

It becomes easier to understand how certain things work and why they were designed like that. If you want to learn about the history of computer sciences, I recommend you to read Code: The Hidden Language of Computer Hardware and Software by Charles Petzold.

Strategy as a mode of behaviour

At the beginning of his fighter pilot career, Boyd dealt with fighter tactics. Later he became a strategist thinking about the highest levels.

For him the highest level was the national goal, which is relatively simple with clear intentions: “Improve fitness, as an organic whole, to shape and cope with an ever changing environment.”

A bit more refined level is the grand strategy which is the pursuit of the national goal. It’s not only about amplifying a nation’s spirit and strength but also about undermining and isolating the adversaries and influence uncommitted actors and potential adversaries so that they are drawn towards one’s philosophy and empathetic towards one’s success.

Then the strategy is about how to bring down the adversaries’ moral-mental-physical wellbeing. How to demoralize them, how to disrupt their operations and overload their systems.

Grand tactics is about operating inside the adversary’s OODA loops, in order to make their world full of uncertainty, confusion and chaos.

Tactics is also about OODA loops, we have to be quicker and more inconspicuous than the adversary to keep and gain the initiative and explore and exploit the vulnerabilities and weaknesses of the adversary.

The self-help movement often talks about how things are mainly not about chance. Chance finds people who are actively looking for it.

While it is true, we shall not forget that chance has also a random element. Maybe only pseudo-random, but it’s still random.

When we discussed the OODA loop, we mentioned Boyd’s claim that we should not worry too much about a decision as it cannot be perfect anyway.

We cannot know all the details, we are not aware of everything, therefore there is some uncertainty, unpredictability in war, in business, in everything. Chance is not negligible and in fact, it’s a problem that has to be managed.

If you are looking for a deeper understanding of Boyd, if you are interested in war, strategy read Science, Strategy and War! You’ll not regret it!

If you liked this article, please