FastAPI is a modern Python web framework based on standard Python type hints that makes it easy to build APIs. It’s a relatively new framework, having been released in 2018 but has now been adopted by big companies like Uber, Netflix, and Microsoft.

Instrumentation is the biggest challenge engineering teams face when starting out with monitoring their application performance. OpenTelemetry is the leading open-source standard that is solving the problem of instrumentation. It is currently an incubating project under the Cloud Native Computing Foundation.

One of the biggest advantages of using OpenTelemetry is that it is vendor-agnostic. It can export data in multiple formats which you can send to a backend of your choice.

In this article, we will use SigNoz as a backend. SigNoz is an open-source APM tool that can be used for both metrics and distributed tracing.

Let’s get started and see how to use OpenTelemetry for a FastAPI application.

Running a FastAPI application with OpenTelemetry

OpenTelemetry is a great choice to instrument ASGI frameworks. As it is open-source and vendor-agnostic, the data can be sent to any backend of your choice.

You can get started with SigNoz using just three commands at your terminal if you have Docker installed. You can install Docker from its official website.

The install.sh script will install SigNoz for you. Trying out SigNoz with ClickHouse database takes less than 1.5GB of memory.

When you are done installing SigNoz, you can access the UI at: http://localhost:3000

The application list shown in the dashboard is from a sample app called HOT R.O.D that comes bundled with the SigNoz installation package. 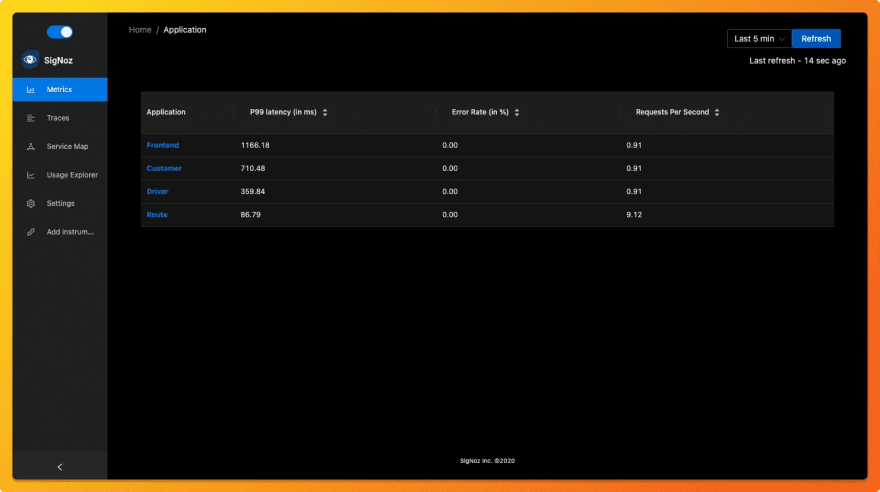 List of applications shown as an example on SigNoz dashboard

We will be using the FastAPI app at this Github repo. All the required OpenTelemetry packages are contained within the requirements.txt file under app folder in this sample app.

You need to set some environment variables while running the application with OpenTelemetry and send collected data to SigNoz. You can do so with the following commands at the terminal:

If you’re running SigNoz in your local host then you can replace <IP of SigNoz> with localhost and the final command will look like below:

You need to generate some load on your app so that there is data to be captured by OpenTelemetry. You can use locust for this load testing.

You will find fastapiAPP in the list of sample applications being monitored by SigNoz. 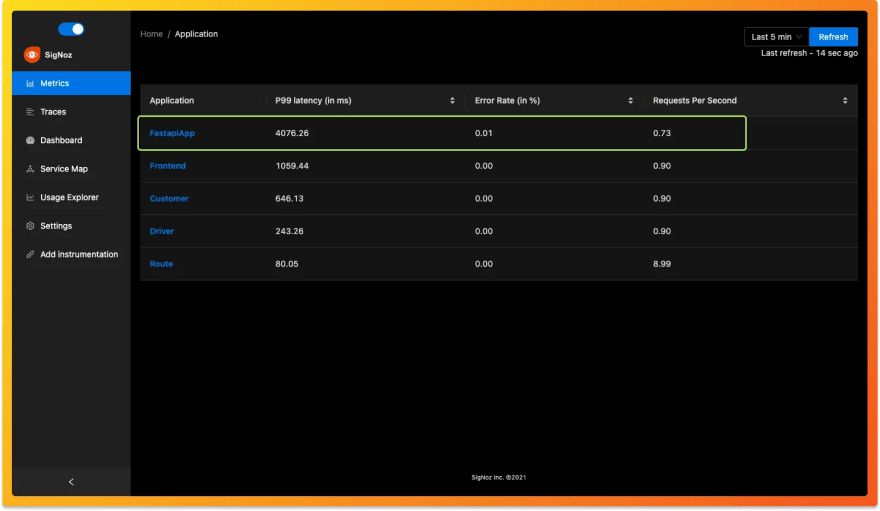 FastAPI in the list of applications being monitored by SigNoz

SigNoz makes it easy to visualize metrics and traces captured through OpenTelemetry instrumentation.

SigNoz comes with out of box RED metrics charts and visualization. RED metrics stands for: 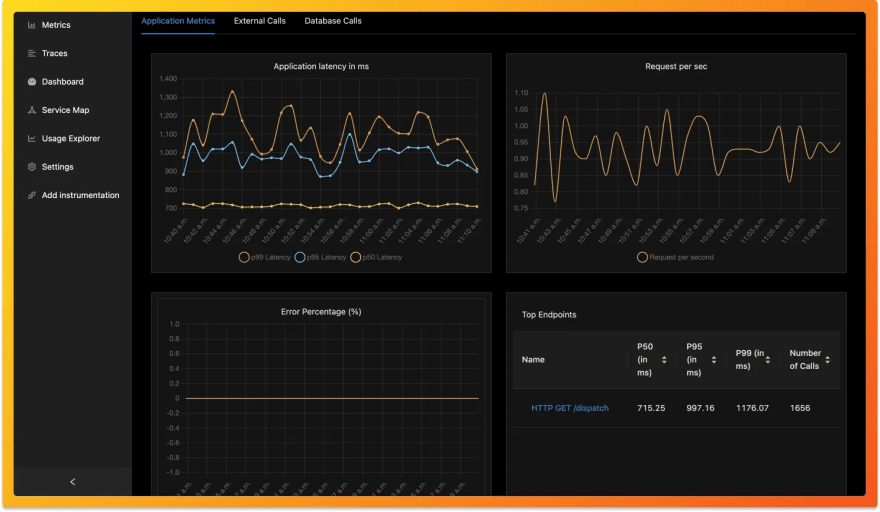 You can then choose a particular timestamp where latency is high to drill down to traces around that timestamp. 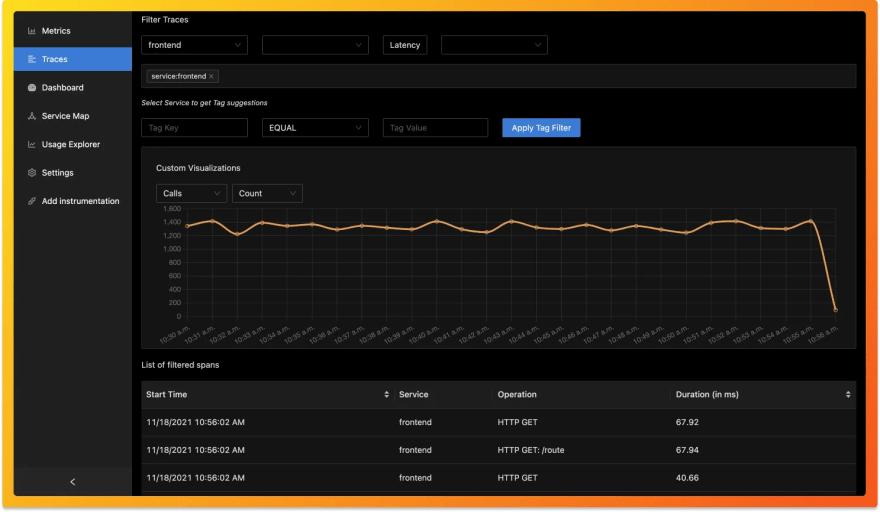 View of traces at a particular timestamp

You can use flamegraphs to exactly identify the issue causing the latency. 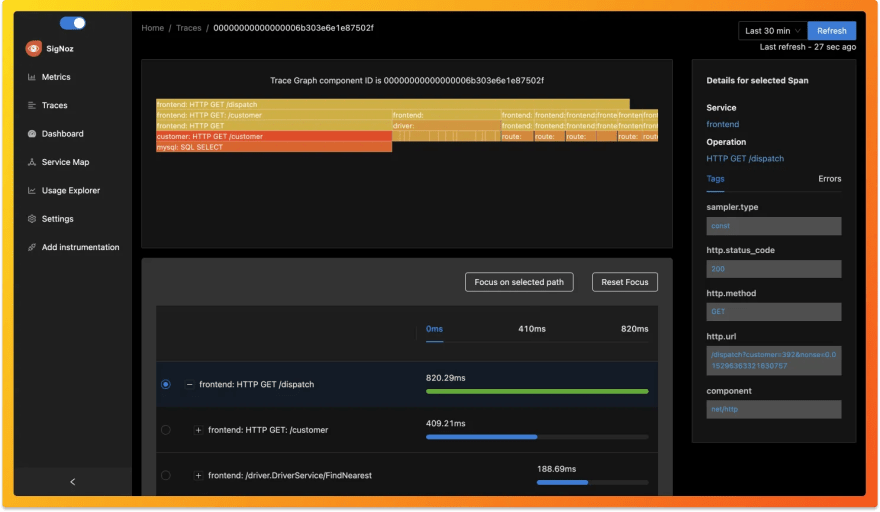 View of traces at a particular timestamp

You can also build custom metrics dashboard for your infrastructure. 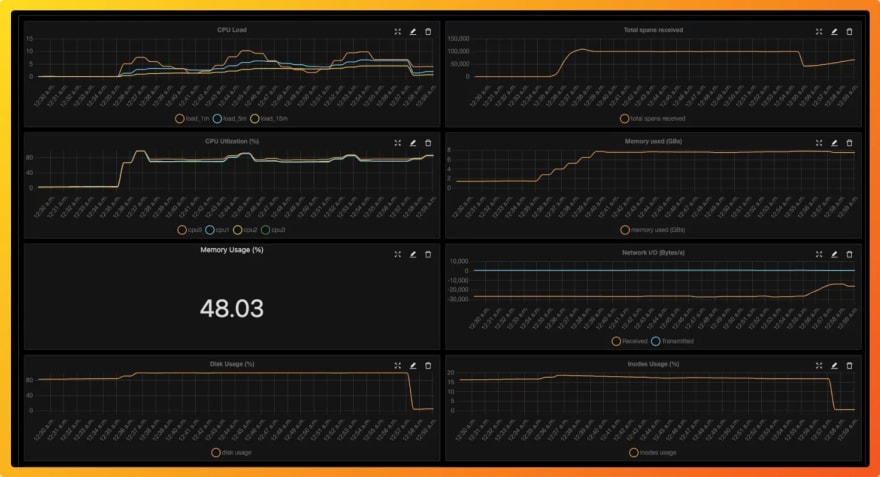 You can also build a custom metrics dashboard for your infrastructure

OpenTelemetry makes it very convenient to instrument your FastAPI application. You can then use an open-source APM tool like SigNoz to analyze the performance of your app. As SigNoz offers a full-stack observability tool, you don’t have to use multiple tools for your monitoring needs.

You can try out SigNoz by visiting its GitHub repo 👇

If you have any questions or need any help in setting things up, join our slack community and ping us in #help channel.

Things you need to know about OpenTelemetry tracing