Aggregate functions are mathematical computations that return a single value from a range of values which expresses the significance of the aggregated data. They are used to derive descriptive statistics and provide key numbers in different sectors like the health, economic, and business sectors.
The diagram below shows the typical operation on an aggregate function on a specific column and what the result looks like. 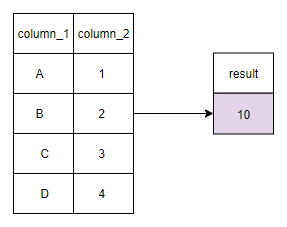 In the diagram above we can see the dataset with two columns (column 1 & column 2). Using the SUM function on column 2 we can see that it adds up all the values in that column and returns a single value in the “result” column.
For this article, we shall be using PostgreSQL and Pgadmin4 as the GUI which is one of the best Graphical user interface platforms for PostgreSQL and is very beginner-friendly. You can download it here for your PostgreSQL needs.

Aggregate functions can only be used in the SELECT and HAVING clause where:
The SELECT clause lists or specifies the column that will be returned for the SQL query and
The HAVING clause specifies a search condition for a group or an aggregate.

I created a dataset of movie downloads for this article which contains certain movie names, genres, and the number of downloads. This can be created using the SQL statement below: 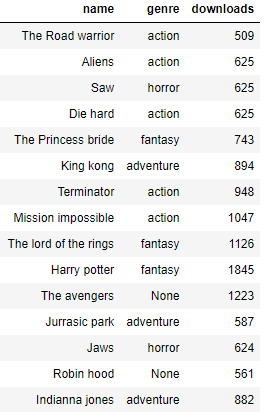 Using the dataset above, we will look at the applications of the different aggregate functions.
🔥Let’s go!!

The COUNT function is the most straightforward function and the best to start with:

The “COUNT(*)” in line 1 above is used to count all the rows in the dataset. This gives the result in the image below:

However, when the COUNT function is used on a column, it counts only the values in that column that are, not NULL:

looking at the count_aggregate_function_2 snippet of code above and the count_aggregate_function_1 snippet before that, we can see that the only difference is the “genre” column which is in the COUNT function and not “*” which denotes all the columns in the table.
The result as seen in the image below is not the same as the COUNT for the entire table because that column contains two NULL values:

Apart from the COUNT function, all the other aggregate functions are only used on one column at a time. Following this, let’s look at the other functions!!

The SUM function was used to illustrate aggregate functions visually in the image at the start of this article, so it’s pretty clear that it adds up the values of a column. Unlike the COUNT function, the SUM function can only be used on columns with a numeric data type:

From line 1 in the code snippet above, we can see that the SUM function is applied to the downloads column (a numeric data type column).

The AVG function gets the mean of all values of a specified column. The mean of a set of numbers is the sum of all the numbers in that set divided by the number of values (count) in the set.
Same as the SUM function, the AVG function can only be used on numeric columns:

Let’s take a look at some helpful clauses – AS, GROUP BY and ORDER BY clause.
Take a look at this code below:

The result for the snippet of code above is confusing without the code.

Now look at this one:

There are cases when aggregate functions does not return a single value per column:

In line 3 above, the GROUP BY clause is introduced. It groups the SUM of the downloads according to the different genres.
The GROUP BY clause groups rows with the same values into summary rows. It is used on categorical columns.
Now let’s take a look at the URDER BY clause:

The ORDER BY clause is introduced in line 4 above. It is used to order the output of a column(s) in a table in either ascending (ASC) or descending (DESC) order.

In this case, we will see how aggregate functions are used to filter a table using the HAVING clause:

In the snippet above, the GROUP BY clause returns the rows grouped according to the “genre” column and the HAVING clause specifies the condition to filter the groups. 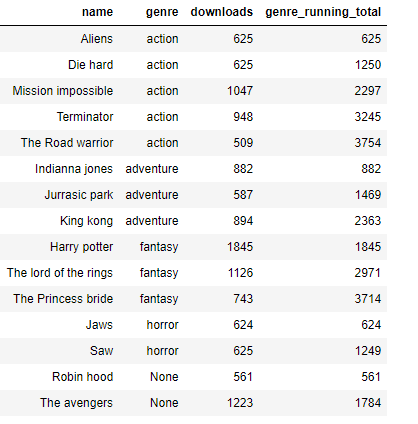 The aggregate window function was used to get the running totals for the number of downloads per genre.

Using Aggregate functions either on their own (SUM(), COUNT(), e.t.c) or as a filter (with the HAVING clause) or as a window function (SUM() OVER()) gives different results.
They are very useful and make SQL coding and data presentation as well as analysis a lot easier.

I hope this has answered some of your questions and given you some new ideas!!
I’ll be Back 😎
Bye for now.